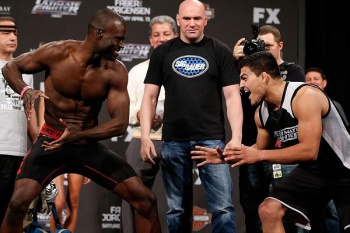 Because we all know how incredibly grounded in reality fighting games like Tekken are.

The Ultimate Fighter is the Ultimate Fighting Championship's reality show, where they set out to find, you guessed it, the one true ultimate fighter. Uriah Hall and Kelvin Gastelum will fight to decide who wins this season of the show, and Hall, in an interview with Fightland, admits that some of his coolest fighting moves came from playing Tekken.

"I would play that videogame [Tekken] so much, and you know, I would go into practice mode and I would have the character, the computer, just spar with me back and forth almost like regular training. And you know, I would just keep playing until I see something that I do or I like and just pick up on it. And for me, I don't know, visually it was almost like my body adjusted to it. So when I started to spar, moves that I would see, it would just come back like that. It's something I couldn't explain. Every time I would see a cool move in Tekken man, I would just practice it till I got good at it. And when I do it in training, they'd be like what the hell was that."

Hall said he used to be asked all the time where he trained, and would often just throw out an excuse because he was embarrassed by the truth, that he trained with a fighting videogame. Tekken has competitive roots dating back pretty far, it is known for having ludicrously long multi-hit combos that players must memorize and time perfectly to pull off. The latest version of the game usually features as a staple in most major fighting game tournaments. While the fantastical characters and locales of Tekken are far from what we would call "grounded in reality," the actual fighting system behind it is based on real-world martial arts.

"I think in any fight, 90% of it is mental," continues Hall, saying that for most fighters, their weakest point is their mind, not their body. His trainer tells us that when he first showed up he knew nothing about fighting except for what he learned in videogames, but when he started his training he took to it like no other. The whole interview seems to suggest that fighting games can help professional fighters become better at what they do.

Seemingly coming full circle, the UFC publishes a series of fighting games known as UFC Undisputed. While Hall isn't in the game as of yet, his prominence in The Ultimate Fighter might net him a character slot in the next edition. I think he would be proud to think that the next generation of MMA fighters could be getting their early training done playing the game as a digital version of himself.