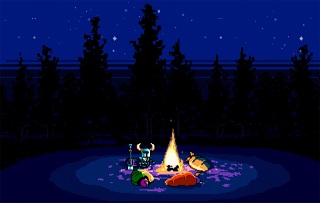 Yacht Club Game's Kickstarter campaign for Shovel Knight has raised more than $300,000 toward the game's development.

When Shovel Knight began its Kickstarter journey, things were looking good early on. Created by Yacht Club Games, the project raised more than $11,000 in its opening hours and reached its $75,000 goal a few weeks later. With time still left on its Kickstarter clock, the developer announced stretch goals to spur further fundraising. These goals initially seemed far flung and unlikely, but the game's nearly 15,000 backers dug deep and pushed Shovel Knight well beyond expectations. The game eventually raised $311,502, more than four times its initial goal.

"Our minds are blown. Our hearts are full," said Yacht Club Games in an update following the end of the campaign. "Most of you don't even know us personally, but just know that you made it possible for us to realize our dreams." Shovel Knight will be Yacht Club Game's first title, but the developer still has something of an impressive pedigree. Much of its staff were former employees of WayForward Technologies, the studio behind retro flavored games like Contra 4, Shinobi, and Double Dragon Neon. This old school experience will likely come in handy for Shovel Knight, an 8-bit homage to games like Mega Man and Castlevania.

Fundraising for Shovel Knight may have come to an end, but Yacht Club Game's campaign efforts are still ongoing. Though the developer has plans to bring the game to PC, Mac, Linux, 3DS and Wii U, it is also in the process of lobbying for a spot on Steam via the storefront's Greenlight service. Considering that thousands of people were willing to fork over money to help see to Shovel Knight made, we'll go on a limb and say there's a good chance the developer will find the votes it needs to push the game to the top of the Greenlight crop.