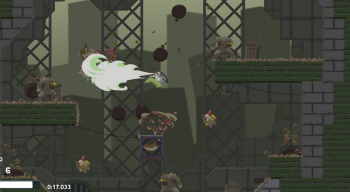 "It was frustrating," says independent developer Hitbox "to not be able to find much data about whether indie game development is a realistic thing to do with your life." The team behind janitorial platformer Dustforce didn't know, going in, how much it would really need to make a game. It had $100,000, courtesy of an independent games competition victory, but would that be sufficient, it wondered. Since then Hitbox has worked out a costs formula, on the assumption that all you really need is to be able to cover basic living expenses and have access to the internet. The problem, as Hitbox saw it, was the X factor: time.

Or, as per Hitbox's formula, minimum cost to make a game = cost of living x time needed x team size. "How much does a year cost?" Hitbox asked itself. A year and a half was how long it thought Dustforce would take to make, and Hitbox had four mouths to feed, scattered all over the globe. About $20,000, it felt, was enough for one person to live frugally for one year - the cost of living - and as luck would have it one of the four was willing to live on savings alone. That meant that the $100,000 would last just enough time for Hitbox to finish making the game.

"It was cutting it a bit close," HItbox admits, "you don't want to finish the project with zero dollars in the bank." There are all sorts of things that can go wrong, and even if things go well, there's still a lag period between ship date and the first sign of profit. Plus, of course, Hitbox wants to be able to do this again, except that it will take longer next time - about 3 years, it estimates - and ideally the Hitbox team would like not to be living in penury during development. In the end, after all the Humble Bundles and other promotions, Hitbox is looking at something like $295,000 profit, after expenses and deductions, or about $4.41 in its pocket per $10 Dustforce sold.

So $100,000 was enough - just barely - and now Hitbox is looking to put its cash into its next project, Spire. "We are all humbled and elated by how well Dustforce has been received," Hitbox concludes. "The joy from our players is enough to keep us making games; the financial success is just an incidental blessing."