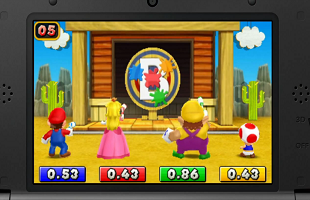 From its earliest beginnings, the Mario Party franchise has served up mini-game fun to millions of fans across consoles including the Nintendo 64, GameBoy Advance, GameCube, Nintendo DS and the Wii. Soon, the franchise will be able to add another notch to its hardware belt, because a new Mario Party is coming to the 3DS this winter.

Revealed by Satoru Iwata, president of Nintendo, during today's Nintendo Direct live feed, the game looks as though it will be a comfortable fit for longtime fans. "The basic gameplay concepts of rolling the dice, moving along a board and competing in mini-games remain," said Iwata. That being the case, Nintendo is making an effort to provide new content. Iwata confirmed the there will be a total of seven game boards, each with their own unique mechanics.

One board shown was focused on player interaction. Another will introduce a boost mechanic players can use to multiply their dice rolls, and a third will force players to make constant risk/reward decisions. Several boards will also be designed to allow for shorter, fast-paced games better suited to the portable experience. The game will also feature eighty-one new mini-games, many of which will be tailored to the 3DS.

All of this said, there are some important details that Iwata failed to mention. Most notably, there was no mention as to what sort of multiplayer players can expect from the title. The last portable entry in the franchise, Mario Party DS boasted single-cartridge multiplayer but failed to integrate any wireless modes. With nearly six years since that last portable entry, we can only hope Nintendo has learned some new tricks. That being the case, with no confirmation one way or the other, all we can do is wait and worry that we'll see old disappointments repeated.