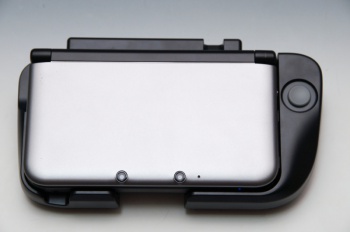 To date I've made no secret of my affection for Capcom's hyper-addictive Monster Hunter 3 Ultimate. Whether its the more aesthetically impressive Wii U iteration or the portable 3DS version, the game is my newest, most pressing vice, though anyone who's played the title will agree that it has some peculiar control scheme options. The default 3DS controls, while functional, are far from a player's best bet when it comes to hunting beasties in comfort, and many prefer the additional stick offered by the 3DS' Circle Pad Pro accessory. Unfortunately, a Circle Pad Pro large enough to snap on to the 3DS XL has only been available to Japanese gamers - until now that is.

As of last night, ShopNintendo added a listing for a Western version of the 3DS XL Circle Pad Pro. While functionally identical to the larger Circle Pad Pro fanatic Monster Hunter fans have been importing from Japan, the US version of the peripheral features a price tag that makes it the new best option for those seeking a better way to hunt monsters. According to Amazon, I purchased my Japanese XL Circle Pad Pro for $47 less than a month ago, while buying one from Nintendo's online store will only set you back a mere $20 (plus whatever shipping and handling charges you might incur). That's an excellent deal, especially for those who desire better control over the in-game camera in Monster Hunter 3 Ultimate.

While MH3U isn't the only game the 3DS XL Circle Pad Pro works with, it is certainly the title that most demands the addition. Though there's only a small handful of games that fully take advantage of the device, titles like Kid Icarus Uprising use the Circle Pad Pro to great effect. It's by no means a must-have addition to your 3DS XL, but if you find yourself addicted to one of the games it supports, that $20 price tag is a low barrier of entry for improving the handheld's controls and ergonomics.

The one big caveat to this deal is that technically the 3DS XL Circle Pad Pro is not yet available in the United States. ShopNintendo is currently taking orders for the device and will be distributing them beginning on April 19. Thus, if you're planning to buy one, know that you may have a bit of a wait ahead of you before your new gadget arrives (though we don't expect it to be too terribly long, given the popularity of Monster Hunter 3 Ultimate and the growing desire for this product.