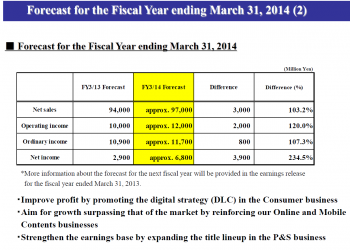 Capcom has warned that profits for this year will be about half of their initial prediction, and is taking some drastic measures to correct that.

Capcom isn't doing too well this year. Profits for the current financial year will be about half of what was initially forecast, the company has warned. It was quick to point the finger at Western developers, under performing projects, and "not taking advantage of digital markets." Their solution for this is to cut ties with Western developers, and produce more DLC, a move that is sure to rustle a few jimmies, considering Capcom's "questionable" DLC policy.

Also to blame for the profit loss were recent restructuring efforts at the company, an effort to keep up with "drastic changes in the industry's market environment." They also cited the "concentration of AAA titles in the hands of few foreign competitors" and its "delayed response to the shift to digital media in the home videogames business," as problems to be addressed.

The most worrying thing that came out of this press release was the fact that Capcom asserted that "decline in quality of titles outsourced to overseas developers" has forced it to alter its business strategy: it wants to shift Western developers to internal R&D and "increase post-release DLC." Earlier this year, Capcom rebooted its Devil May Cry franchise with DMC: Devil may Cry, which was developed by UK studio Ninja Theory. While getting generally favorable reviews, the game ultimately failed to reach sales expectations.

Lastly, Capcom stated that "work in progress in game software" has been "strictly re-evaluated for business restructuring". This is business speak for "games that we think won't sell well, or don't have the potential for post-release DLC, we are going to cancel."

Capcom recently tapped American developer WayForward to develop its DuckTales remake. Let's hope that this one manages to avoid the chopping block!