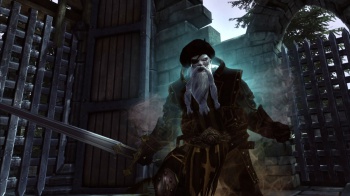 Neverwinter is an upcoming MMORPG based on Dungeons & Dragons, that you'll be able to play as early as next Thursday.

If you're reading this text, I feel pretty comfortable in assuming you've got, at the very least, a passing familiarity with Dungeons & Dragons. It's the world's most popular pen and paper roleplaying game, and is something of a common ground for geeks of all stripes. Further, I'd like to assume that you're familiar with Neverwinter Nights, the PC roleplaying game created by BioWare that served as a follow up to the Baldur's Gate series. I only mention that game to note that the Neverwinter discussed in this article only shares its title with that game; beyond that it's a completely unrelated MMORPG developed by Cryptic Studios (they of City of Heroes fame).

Now, with that established, Neverwinter looks very interesting, if only due to its Dungeons & Dragons lineage. That alone should sell the title to many players, and in even better news, those whose interest is piqued by the mere mention of D&D will be happy to hear that Cryptic and publisher Perfect World Entertainment have announced that Neverwinter will enter open beta very, very soon.

From the official site:

If you are a Guardian of Neverwinter, you will be able to play Neverwinter starting April 27, 2013 at 9 A.M. PDT

Hero of the North? Guardian of Neverwinter? What's that mean, you suddenly find yourself wondering. In short, these are incentive offers for those willing to shell out extra cash for Neverwinter. Once it debuts, the game is slated follow the increasingly popular free-to-play business model, but as with most MMOs along those lines, if you opt to send Perfect World a bit of extra cash,you'll be granted a handful of bonus items and benefits within the game. The full run-down can be found on the game's Founder's Pack page, but keep in mind that purchasing any of these packs is completely optional. If you're willing to wait until April 30 to try the open beta, you won't need to spend any cash at all.

Beyond that, the only thing you really need to figure out is whether or not your PC can run the game at an acceptable level. Cryptic offers a list of Neverwinter's official system requirements, though for the absolute best performance it's generally wise to double whatever the company claims as a game's recommended specs. Neverwinter should run on anything above the minimum, but as long-time PC gamers will attest, meeting the minimum requirements rarely guarantees an enjoyable gaming experience.