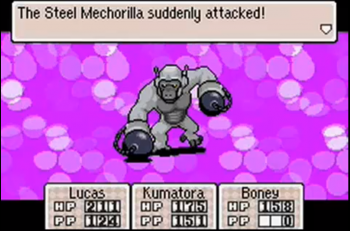 The team is willing to edit the files to fit whatever new standards are necessary (content, formatting, memory size, etc.)

Mother 3 is the sequel to quirky JRPG Mother 2, which you may know better as EarthBound in the US. Perhaps a little bit too quirky, the third installment of the series never saw a US release. But, if Kickstarter has shown us one thing, it's that you should never underestimate the dedication of fans. The Mother 3 Fan Translation Project dedicated itself to making an English patch for the Japanese Mother 3 ROM, a goal which they achieved in 2008. Now, perhaps in the wake of the EarthBound for virtual console announcement, the team has offered all of its assets up to Nintendo, in the hopes that an official English version of Mother 3 can be produced.

"I realize that localizing a game this size can cost a lot, so if it'll help in even the slightest, I'll gladly offer to let Nintendo use my text translation files for any use at all, completely for free," said lead translator Clyde Mandelin. Mandelin says he is willing to do whatever it takes to see an official translation of the game. "I'll even edit the files to fit whatever new standards are necessary (content, formatting, memory size, etc.), completely for free. I'll even retranslate everything from scratch if need be."

While very unlikely that Nintendo would use a fan translation for an official version of the game, Mandelin points out that it has actually happened before. Ys: The Oath in Felghana used a fan translation as a base for the game's official Western release. He believes that this sort of thing will become more and more common over time, but only if the work is up to a professional standard.

Mandelin believes his work is up to that professional standard. He stresses the fact that he is not just some kid who knows Japanese and loves Mother 3, he is actually a professional translator with many years of experience. He offers up a few references to let Nintendo know that he actually knows what he is doing.

"I definitely realize this is a silly-sounding offer and all, but I figure it's better to make the offer and seem silly than possibly miss an opportunity entirely," said Mandelin, hoping that someone at Nintendo will at least consider this offer if the localization of Mother 3 ever comes up in a business meeting.