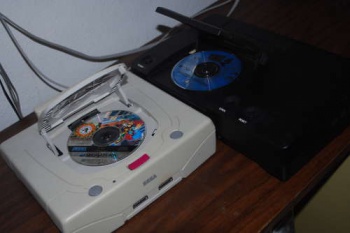 For several thousand dollars, you could be in the running for a functional Sega Saturn prototype and its integrated modem.

In a console generation, systems don't simply launch, have game releases, and then make way for the next iteration. Manufacturers are always finding ways to improve the hardware before it becomes obsolete, fixing design flaws and expanding features along the way. One such example is Pluto, the codename for a Sega Saturn prototype that would include full online support, but was cancelled in its early stages. Reports state that only two Pluto systems were ever constructed, and one lucky gamer had the good fortune to snatch up a unit for $1 at a flea market. That Sega Pluto is currently available at an online auction, but don't bother bidding unless you have some serious cash; at the time of writing, the Pluto's value sits at $7600 after three bids.

The Pluto was your typical Sega Saturn, but with a integrated NetLink modem built directly into the unit. It's a simple change that greatly increased the size and weight of the system, as can be seen in attached pictures. "This thing is a beast, and definitely the heaviest console I've ever held in my hands," says the Sega employee who first revealed the Pluto's existence. "The front features two controller ports, and on top you have a flip-top drive bay, a cart slot, a Power button, and the venerable Reset button ... The left and right sides feature beautiful-and-exotic vents, while the back is standard Saturn, save for the Netlink ports." Standard Saturns previously allowed for a specialized 28.8k modem to be installed via the cartridge slot.

Shortly after pictures of the Saturn-that-wasn't appeared online, a Destructoid community member noticed the similarity to a flea market purchase, and decided to sell it through an online auction. Outside of a broken lid that won't stay shut, the system remains fully functional, and supports all NTSC supported games. I've never been a Saturn enthusiast myself, but if you happen to have a few games in your library, now's your chance to put a price on nostalgia and snatch it up.