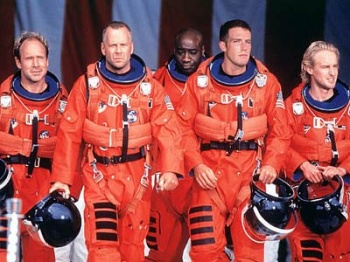 Michael Bay is sorry for Armageddon, but probably not for the reasons you think.

The Hollywood director who never met an explosion he didn't like says he's sorry. In a Miami Herald interview about his upcoming Pain and Gain, which is apparently cut at a much slower pace than his usual "hyperkinetic" style, Michael Bay acknowledged that people have always given him a hard time about his editing style but also insisted that he's actually slowed down over the years.

And then, amazingly, he said he was sorry for Armageddon. "I will apologize for Armageddon, because we had to do the whole movie in 16 weeks. It was a massive undertaking," he said. "That was not fair to the movie. I would redo the entire third act if I could. But the studio literally took the movie away from us. It was terrible."

Making the situation worse, Bay said his visual effects supervisor had a nervous breakdown, so he had to take the job over himself. Luckily for him, he knows a guy. "I called James Cameron and asked 'What do you do when you're doing all the effects yourself?'" he added. "But the movie did fine."

Looking at Michael Bay's entry in IMDB, I realize that I haven't actually seen many Michael Bay movies and the only one of the bunch that I actually liked was The Rock. That leaves me a little unclear as to why, aside from that Aerosmith travesty, he feels the need to apologize for Armageddon specifically, as opposed to, say, Bad Boys 2, Pearl Harbor or the whole Transformers thing. I suppose I should be happy enough that he's at least showing a sign of seeing the light, and who knows? Maybe this will be the first of many to come. I'd say a few more are due.