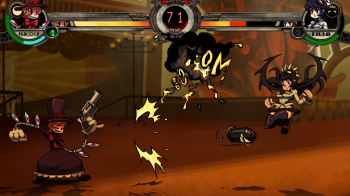 PayPal says it was not willing to take the risk that backers of the Skullgirls crowdfunding campaign would demand refunds.

Remember the heartwarming story of the Skullgirls crowdfunding campaign on IndieGoGo? Developer Lab Zero asked its fans for just $150,000 in order to develop a DLC character for the popular fighting game, and ended up raising over $800,000. Happy smiles went all around, the devs raised their money, fans will receive five new DLC characters for the game, and the whole story was a poster child for crowdfunding.

But every Christmas miracle has an Ebeneezer Scrooge, and in this tale, the role of the villain is played by PayPal, for refusing to pay out the majority of the crowdfunding campaign's funds on the basis that it was not willing to take the risk that backers would demand refunds. The majority of backers to the campaign opted to pay through PayPal, which means the popular payment service was sitting on $700,000 of the $829,000 raised. This left Lab Zero games unable to pay its staff, and may have affected the projected release schedule of the DLC characters.

PayPal offered to unfreeze the funds if Lab Zero agreed to take on the burden of providing refunds if necessary, but CEO Peter Bartholow refused. He said that the point of its crowdfunding campaign was to provide money for development costs, and Lab Zero should not be accountable for refunds.

The good news is that after venting his frustrations on the NeoGAF forums, Bartholow convinced PayPal to unfreeze the account, on the condition that it withholds $35,000 as collateral. He has filed a complaint with the Consumer Financial Protection Bureau, saying that none of PayPal's rival payment services, such as Amazon, have ever stooped to this level of scummyness.

This is not the first time small-time devs have had a run in with PayPal. Minecraft's Markus "Notch" Persson found himself in almost the exact same situation several years ago, and there are plenty of recent tales of PayPal trying to "Scrooge" its consumers.