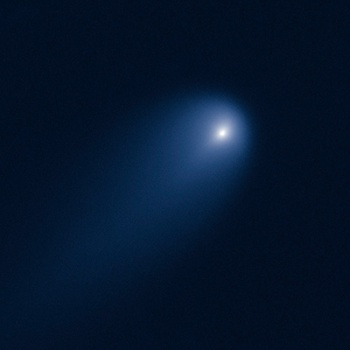 Comet ISON's path could either delight or dismay come November.

Rushing for the Sun at 47,000 miles per hour, comet ISON might be the comet of the century, and the Hubble telescope has snapped a preview of what we're in for here on Earth. It's possible that ISON might survive close enough to the Sun to become very bright - brighter, in fact, than the full moon - and visible during the daytime here on earth. Hubble snapped a picture of the comet out near Jupiter's orbit on April 10, a distance of about 386 million miles from the Sun and about 394 million miles from Earth. ISON will hopefully go close to the sun, survive, and start making the journey back out of the solar system. At that point it will be visible from Earth.

The comet currently has a jet of heated gas shooting from its solid nucleus, causing a very visible dust trail. That trail is being caused on the sunward side of the comet - because those gasses are being heated by the sun. The nucleus of a comet often contains pockets of frozen gas. If ISON survives getting within hundreds of thousands of miles of the sun, then we here on earth will be in for a treat in late November of this year. Right now, ISON is just visible as a tiny speck on most telescopes.

Hubble's images make the comet's nucleus to be about three or four miles across. The images, which would have been in black and white originally, were mapped to a blue scale according to brightness values, allowing researchers to better study the range of brightness from the comet. Astronomers believe that this is probably ISON's first trip into the inner solar system.

Love our science news? Try the Geekend Update, which brings you fascinating science every Saturday.