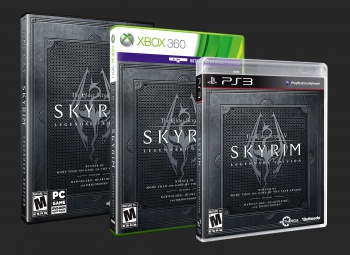 Haven't yet purchased The Elder Scrolls V: Skyrim? You lucked out slowpoke. Wait a few weeks and you'll be able to own the whole magilla for one low price.

Clear introduction to an article covering the newly-announced Legendary Edition of The Elder Scrolls V: Skyrim, or a shallow excuse to get paid for using the word "magilla?" Does it really matter?

On to business: This morning, Bethesda Softworks issued a press release that serves as the first official confirmation and announcement of the upcoming The Elder Scrolls V: Skyrim Legendary Edition. We've known of this compilation for a while, but today marks the first time Bethesda would admit to its existence. As you'd expect from such a grand title, the Legendary Edition is the final compilation of all content Bethesda has created for The Elder Scrolls V: Skyrim.

And, if recent comments are to be believed, it's also a compilation of all the content Bethesda will ever create for Skyrim. Like I said, magilla.

So, what are you getting in this package? Once again, say it with me, magilla!

For $60, regardless of whether you prefer the Xbox 360, PC or PlayStation 3 platform, you'll gain the original release of Skyrim, its three DLC expansions (Dawnguard, Hearthfire and Dragonborn) and all of the minor additions Bethesda has released as extra content in the game's various patches. Or, as Bethesda's official announcement puts it, "added features like combat cameras, mounted combat, Legendary difficulty mode for hardcore players, and Legendary skills."

If your interest is suddenly piqued, you will be sad to know that you're in for a bit of a wait. According to Bethesda, the Legendary Edition hits retail in North America on June 4. Those of you who live in Europe and Australia will have a slightly longer wait: June 7, to be exact.