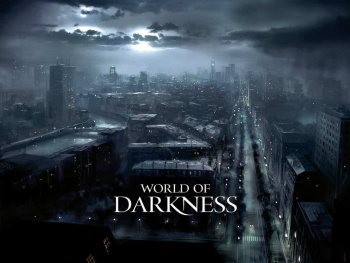 After years of lurking in the shadows, the supernatural MMO has poked its head out for a quick check-in.

The World of Darkness urban fantasy setting is ripe for an MMO, and EVE developers CCP are working on making that happen. Unfortunately, since the project was first announced six years ago, we haven't heard much about the game's progress. Although that kind of radio silence is appropriate for a setting full of supernatural puppet masters waging war right under our collective noses, it doesn't bode well for a budding MMO. Not to worry, though: CCP broke the masquerade at EVE Fanfest 2013 to give patient fans a look at how things are going with WoD's development. It looks the game will see the light of day after all - in a manner of speaking.

The development team at CCP has seen some reshuffling since World of Darkness was first announced, but currently there are 70 people on the crew. The presentation was more technical than it was flashy; the developers simply opened up and talked about where they were in the development process. It was a surprisingly transparent approach in this age of hype-mongering, with a good portion of time being spent demonstrating some cool pieces of technology like the game's procedural city generation.

Not much was said about gameplay outside the context of development checklists. The team has recently been experimenting with vampire powers and social options. Objectives for 2013 development include PvE environments, clothing systems, and out-of-game social options. Some sort of crafting system might be in the works, but in a more indirect manner than you may be used to. "You're a powerful, immortal lord of the night," the presenter joked. "You don't want to stitch a shirt."

A bit of in-engine footage was shown, but no actual gameplay. The videos that were presented are being kept under wraps, as CCP doesn't want to give the impression that the game is any closer to release than it really is. That's a pretty strong indication that you won't be stepping into the World of Darkness any time soon, but it's coming along, slowly but surely.