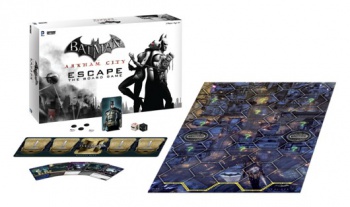 Even if you always expect the unexpected, this board game adaptation may surprise you.

If you're like me, you had a single nagging thought at the edge of your mind as you played through Batman: Arkham City: "This intense reflex-based combat is great for a video game, but you know where it would be even better? A board game." Okay, no, I wasn't thinking that either. But somebody was, and now the idea is soon to be a reality. The board game craftsmen at Cryptozoic Entertainment are putting together a spinoff tabletop game based on the 2011 video game, and as strange as it may seem, it doesn't look half bad.

Batman: Arkhman City Escape pits two players against one another in the same premise as the video game: the inmates of Arkham Asylum have taken over, and it's up to the Dark Knight to stop them. One player dons the cape and cowl of Batman (only figuratively, to my great disappointment) and uses a deck of combat cards and utility belt gadgets. The other player controls a handful of villains from Batman's expansive rogues' gallery, drawing from 40 of Batman's most iconic enemies. The villains are attempting to take hostages and escape Arkham, while Batman must apprehend them before they get out and wreak havoc on Gotham.

There's enough clever elements to the board game to prevent it from most criticisms of cashing on a successful video game. Gargoyle statues are randomly scattered around the board, providing Batman with quick transport just like in the video game. The Riddler's trophies appear to be present on the board as well, just in case you thought they'd forgotten to include any element of Arkham City. The cards feature some nice-looking depictions of Batman's friends, foes and gadgets, seemingly pulled straight from the game engine. The Bat will even earn experience points for dispatching foes. Okay, so maybe they could have brought in some original ideas, but the board game should be nothing if not faithful to its source material.

Batman: Arkham City Escape is slated to hit the shelves of the UK in June, with a release window of Q2 2013 for other regions. That should give you plenty of time to work on your costume. There's no point in pretending to be Batman if you're not going to go all out.