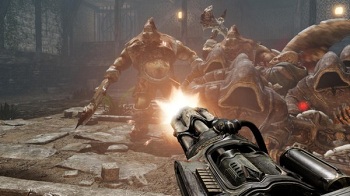 Painkiller: HD. What's the HD stand for? Harley Davidson? Home Depot? High Definition? Well, the last one works, but it's really Hell and Damnation, of course. It's the fancier remake of everyone's favorite horror shooter. Yes, it has that gun that shoots shurikens and lightning. It also has the one that pounds six foot stakes into beings both alive and undead. Now, it's about to get a little more of everything, thanks to the the Full Metal Rocket DLC pack. While the previous packs primarily added single player content, this addition is all about expanding the multiplayer.

Full Metal Rocket adds little bits to almost everything. Three classic Painkiller maps are returning, as well as two new additions, each one rendered in gore-ious HD (according to the press release). You can play multiplayer with the new SS Zombie and Leper skins and blow your enemies apart with the new landmines. If direct social interaction isn't your thing, there's also a new Survival game mode that you can play all by your lonesome. In Survival, you'll run around, blowing apart new enemies while fighting with limited ammo. The best scores get tracked on a leaderboard, which is the perfect place to be passive-aggressive with the rest of the playerbase.

Full Metal Rocket is available on Steam for $3.99. Those just tuning in can grab it and the three previous three DLC packs for $14.99 as part of the DLC Bundle 1.