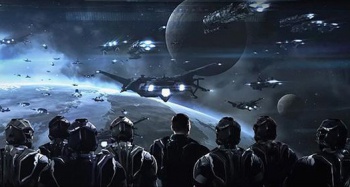 The long awaited companion game to EVE Online will be leaving its open beta behind for a full-fledged launch in May.

Now in development for nearly three years, Dust 514 has impressed since its inception with the ambition of its premise alone. Working as companion piece to the long running MMO EVE Online, it would allow players in one game to influence events and situations in the other. Since its 2009 reveal its makers at CCP have given players gradual glimpses into its development. A closed beta began in June 2012 with an open version being made available in January of 2013. Now, it seems the betas, development and waiting may finally be over. CCP has revealed that the game's official launch will be upon us shortly.

"Dust 514 launches on 5.14.2013," said Shaun Norton, a PR representative working for CCP, on the Dust 514 Twitter account. The announcement solicited excitement from fans of the open beta. That said, there are some worrying that with three years passed since the initial announcement interest may have waned for the PS3 exclusive, free-to-play shooter. Moreover, some are wondering what CCP plans to do now with the PS4 on the horizon. "Of course we're thinking about [PlayStation 4's imminent release]," said CCP's Thor Gunnarson, speaking to IGN last week. "We expect Dust to last at least as long as EVE. We're planning for 10 years of operation. You would expect that, of course, we will follow our players, follow the market, to the platforms that matter to them."

While CCP has confirmed nothing, this seems to indicate that new versions of Dust 514 may someday surface in addition to the PS3 game launching in May. What will be interesting to see is if the game remains a PlayStation exclusive or if it will wind up branching out to other gaming systems. Some were baffled why the EVE Online companion wasn't being made for PCs to begin with, and with CCP hoping for a decade-long lifespan, perhaps a port isn't out of the question.