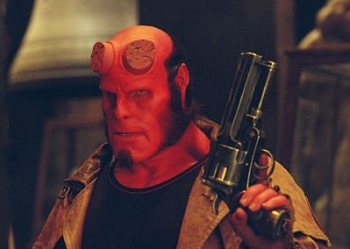 According to the Hellboy actor, director Guillermo del Toro owes the world a full trilogy.

All things considered, Hellboy and its sequel were a fine pair of films. They successfully adapted the horror and pulp tone of the original comics, and introduced the ass-kicking half-demon to a broad cinematic audience. Hellboy II's conclusion was open-ended enough for additional sequels, but director Guillermo del Toro and actor Ron Perlman felt they'd done enough, so they moved on to other projects. That was five years ago however, and in the time since, Perlman has decided that Hellboy needs to return in a big away.

"I've been giving Guillermo body shots for two years," Perlman said during a C2E2 convention interview. "We both walked away from Hellboy II agreeing that there would never be another one. But, with the passage of time, it became clear to me that he really always designed it as a trilogy. He has a very well-articulated idea of what the resolve would look like and it's amazingly theatrical and is epic in scope and would make for amazing cinema, with or without the first two movies.

"There are so many questions posed in the first two films that absolutely need to be answered," Perlman continued. "'You owe it to the world to finish this trilogy.' I've been giving him Jewish guilt."

Perlman's argument for a Hellboy trilogy is sound, but actually making Hellboy III isn't so simple. The required budget for a third movie would be far higher than the originals, needing a minimum of $140 million to complete. That means a box office smash is mandatory to make a reasonable profit, and few producers are willing to take the risk for another Hellboy sequel.

Despite the financial risks, I'd love to see a third film bringing the stories of Hellboy, Liz Sherman, and the B.P.R.D. to a close. Unfortunately, if Perlman is going to fill that role, del Toro needs to get started right away. "I'm pushing seventy," Perlman said, "so he better fucking do this soon."