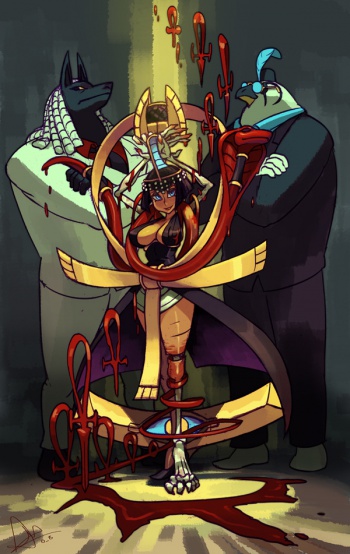 If you're bummed that your choice didn't make it, there is still one more upcoming fan vote for the second mystery DLC character.

Despite PayPal putting a hold on its crowdfunding payments, developer Lab Zero is still determined to continue the development of new Skullgirls DLC characters, revealing the results of the first mystery character's fan vote. Meet Eliza, an Egyptian-themed fighter with a couple of burly bodyguards and the trademark Skullgirls "breasts-that-are-bigger-than-her-head."

She'll be joining Squiggly, Robo-fortune, and Big Band, along with a second mystery character, as new DLC characters for the game. If you are bummed that your choice wasn't voted for, fear not! You still have one more chance to vote for your character of choice, as a second fan vote will soon be held to determine the second mystery character. You can see all the possible choices in the gallery bellow.

My vote for the second mystery character goes towards Andy, because a) having another male character in their roster alongside Big Band may help the developer distance itself from those earlier cries of sexism, and b) he's a freaking anvil with legs and boxing gloves! How can you not vote for him?

Lab Zero have been entirely transparent throughout this whole development process. Keeping an eye on its IndieGoGo page will reward you with constant updates, showcasing streams and concept art of work-in-progress on the DLC characters and their stages.