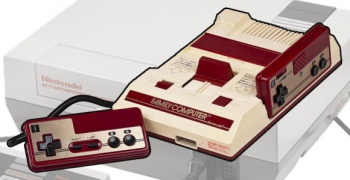 Masayuki Uemura, the creator of the Famicom, says the console's unique color scheme was based on his boss' favorite scarf.

This year, Nintendo celebrates the 30th anniversary of its "Famicom" console. The Famicom is the Japanese name for what we know as the Nintendo Entertainment System (NES), and it marked Nintendo's foray into the home console business. It was a bold gamble for a company who started out making trading cards, and its creator Masayuki Uemura tells Shunpure News he was certain it would be a losing move for the company. Its resounding success, and influence to the entire gaming industry came as a massive shock to Uemura, considering the console's extremely rocky beginnings.

"I felt like an already beaten war general who had another mission sent from the top," said Uemura, complaining that the three-man-team Nintendo assigned him to design an "arcade-quality" home console was almost a joke compared to the dozens of people working on the successful Game and Watch handhelds. "I still have a notepad I used at the beginning of development. There was no hint of a future at that time, so all I wrote was pessimistic bitching."

Uemura tells of how his team, desperate to preform such a feat-of-strength despite their minuscule size, tried to "borrow" some ideas from the already in-use Atari 2600. They eventually decided that the machine was not up to "arcade quality" and ditched the ideas, but the Atari 2600 did teach them to lower their standards. And they would really have to lower their standards if they wanted to meet the incredibly low target retail price of 10,000 yen (US$99).

The budget cuts eventually led to rumors that the "unique" red and beige color scheme was chosen because it was the cheapest, but Uemura reveals the real reason was a lot more humble. "The reason for the red color was simply the president's order. He often wore a scarf with a similar color because he said it was his favorite. Looking at the president, it was easy to know what he would choose for the body design."

Uemura initially chose the name "Family Computer" for the console, based on the fact that he liked the terms "personal computer" or "home computer," but really wanted the console to stress the inclusion of the whole family. While it is now almost ubiquitously known as the Famicom in Japan, Uemura says that his boss initially rejected the idea (which actually came from his wife). "When I told my wife about the name Family Computer she said 'Why not just call it Famicom? Everyone's just going to shorten it to Famicom anyway.' I thought she had a good idea so I took it to my boss. He rejected it saying 'Famicom? That makes no sense.'"

The gaming legend ends his interview by offering a bit of perspective on why he thinks that the console he first thought was doomed to failure became such a huge hit. "With our limited specs, it was a lot of hard work to make a machine with clumsy graphics compared to today's systems. However, this gave room for the player's imagination to roam. With the Famicom, each player has their own view of the game's world, creating a deeper universe."