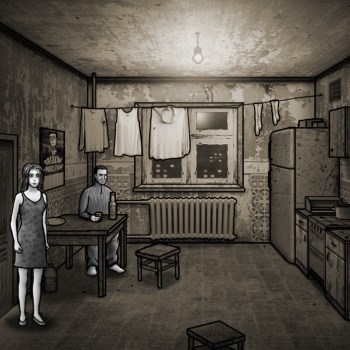 The first-ever Russian Indie Bundle aims to shine a spotlight on indie game developers in the Motherland.

The indie game bundle scene is pretty crowded these days but (and this will probably come as no surprise to some of you) I couldn't resist giving this one a little love. The Russian Indie Bundle is a collection of six games from - you guessed it - Russia, a nation still committed to the PC as a gaming platform and, more importantly, with a decidedly non-Western attitude about what constitutes a good time.

Here's what you get: Flyborg, in which you use a laser-armed robot to kill spiders and save flies from their webs; The Light, a post-apocalyptic "Last Man On Earth" journey that the developers say is not a game but an "experience"; The Kite, a point-and-click adventure about the post-Soviet experiences of a woman with an abusive, alcoholic husband and a missing child; Dungelot, a casual dungeon romp that I think is actually fairly well-known to Western gamers; Astrodude, a fairly straightforward platformer; and Transition, a sci-fi adventure of some sort, although it's trickier than the rest to nail down since it's the only one that's not available in English.

In fact, neither is the Russian Indie Bundle website at the moment. The Twitter account says that the English site will be online "within the next days" but in the meantime, if you want these games now you're going to have to wrestle with a little Cyrillic. The links are clear enough, though, so it's not too much of a challenge, and if you're really a fan of Russian videogames then you won't be happy unless you're struggling with it anyway.

The Russian Indie Bundle is apparently going to run for 30 days so you've got lots of time to grab whatever interests you, and since it's all free there's no reason not to snag everything. All of the games can be downloaded directly, Flyborg and The Kite can also be had through Desura and Dungelot is available for Mac, Android and iOS devices as well as the PC.