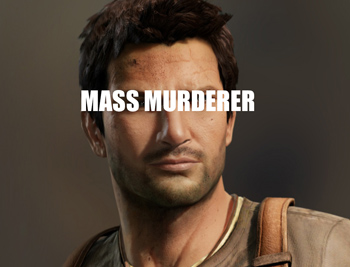 "The designs will change because they will have to change. We are running out of options. The old ways, they no longer work."

"Ludonarrative dissonance" sounds like the kind of masturbatory, five-dollar term that lazy news hacks use to make their opening sentences more impressive, but the concept - that there can be a disconnect between the story a game wants to tell and the gameplay it uses to tell it - has finally migrated from fringe criticism to mainstream thought. While there'll always be a place for games with goals like, "kill that guy," "kill that other guy," and ,"kill all the guys," audiences are starting to demand more from narrative-driven titles. They don't just want good gameplay and good writing, they want good gameplay and good writing that complement each other. One dev who seems to have been thinking about this concept a lot is Adrian Chmierlarz, most well-known for his work as creative director on the deeply-intellectual study of nihilism that was Bulletstorm.

"Things are aligning in a way that, by the end of this generation, people started asking, 'Hey you know what, why is Nathan Drake a mass murderer?'" he told Eurogamer. "And they didn't ask that with the first Uncharted. They didn't ask that previously."

Actually, they did, but when Uncharted was released, criticizing the disconnect between a game's story and its gameplay was considered picky and pedantic. Such observations have been the bread and butter of sub-par webcomics for years (and I should know, I write one), but it was rarely considered "proper" criticism. Still, more people are paying attention now, and Chmierlarz puts that down to the growing influence of indie games, particularly less traditionally "game-like" titles like Dear Esther.

Chmierlarz has since left Bulletstorm developer, People Can Fly, and become the head of a new studio named The Astronauts.

"Something happened and it was probably indie games and the fight of indie developers to show a different side of gaming," he said. "Some people tasted a little bit of that indie gaming, started thinking about games and then they go back to the old ways and go, 'OK there's something wrong here.'"

And he's right. BioShock Infinite was met with pretty much uniform praise from traditional gamers, but many criticized the game's "excessive violence," claiming it worked against the narrative. In some ways it seems unfair that whenever a game shows a spark of intelligence it ends up being held to a higher standard than its contemporaries. On the other hand, it's great to see games being judged on the same aesthetic, ethical and intellectual merits as other, more venerated, art forms. The question is whether developers will listen to this criticsm. Chmierlarz seems to think so.

"If people are truly being bothered by the fact that Drake kills 400 men during the course of the game - that was the beginning - then these questions start popping up more and more, like the BioShock Infinite discussion. Suddenly everything is wrong," he continued. "The designs will have to change, no matter what, so the next generation from that point of view is going to be also, possibly even for the very first time, the next generation of game design."