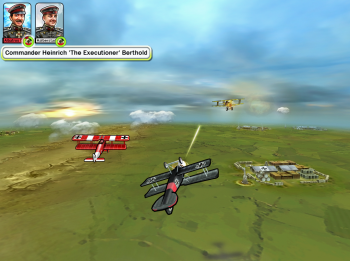 Sid Meier, the brains behind the Civilization franchise, and Firaxis, the XCOM developer, have a new Great War themed flying game for iOS, due May 9th. Ace Patrol will put you in the very finest technological break-through the boffins at Fokker and Sopwith can come up with: a wooden-framed canvas-covered flying machine, coated with alcohol-based spirit, and powered by an unprotected fuel tank. Try not to catch fire, or the phrase 'flying coffin' will have real meaning for your pilot.

"The mobile market is starting to mature," Meier believes. The development needs are about the same as that of a game designed for a standard desktop device, but the team doesn't need to be as big, and the development time is much shorter. End result, says Meier, is that his team can pay more attention to game design, "and less of the other stuff." Speaking of other stuff, the game itself will be free to play, but some extra missions and in-game items will be charged for in the store.

Moreover it sounds like the kind of strategy title the XCOM crowd could go nuts for. "There will be some scenarios where you might be able to muscle your way through them without thinking strategically," Firaxis' Pete Murray told Polygon, "but if you do that it'll be like in XCOM where you lose three members of your squad and you have a guy who's wounded for 14 days." Yes, you won, but a few more victories like that and you won't have a squadron left.

There'll be a choice of 30 period-accurate aircraft and over 120 different missions, through which you'll be carefully picking your way; success means your pilots gain special skills, while failure may mean a fiery end for your Hell's Angel.