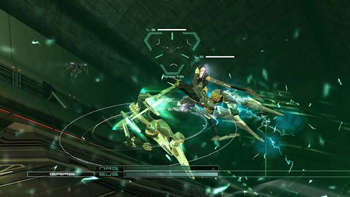 Last year Hideo Kojima promised fans he'd come up with a Zone of the Enders 3, but this year he's breaking that promise. Kojima made this announcement via his HideoBlog web radio show, and said that problems with mecha combat title Zone of the Enders HD Collection were the root cause of his decision.

The HD Collection just hasn't been living up to fan expectations, Kojima admits. The transition from 30 FPS to 60 was a little too much to handle, and while new players may not have noticed it, old fans accustomed to smooth game play were disappointed. Kojima apologized for this, and said that the game had been entirely re-programmed, with a new, free patch coming out for PS3 users. There's no release date for that PS3 patch, and Xbox 360 fans had better not be hoping for the same treatment, as there won't be a fix for them just yet.

However there are only so many assets to go around, and re-programming the old stuff meant that the team working on the new stuff has been demolished. Kojima wants to take a second look at the series before deciding whether to go ahead, and will be asking fans whether or not they really want to see another Zone of the Enders game before committing resources to the project again.