Details spill forth about this crowdfunded, episodic horror game. 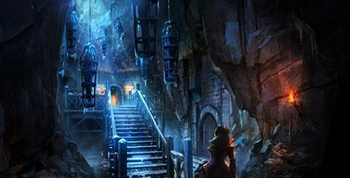 It's hard to have a serious conversation about the survival horror genre without mentioning Eternal Darkness: Sanity's Requiem. A rare M-rated treat on the Gamecube, it succeeded in bringing deeply unnerving horror with layered storytelling and unique mechanics. While critically praised, developer Silicon Knights eventually produced a string of flops and vanished in the flash of a lawsuit. Now, a new game has appeared, claiming to be its spiritual successor "from the creators of Eternal Darkness". It's called Shadow of The Eternals and they're asking for $1.5 million dollars of your dollars to bring it to life.

As with all investigations into the bizarre and paranormal, the details are still a bit vague. The Shadow of The Eternals web site simply shows a counter and the Precursor Games site is dead. Some enterprising people over at NeoGAF grabbed a cached copy of the site that detailed a crowdfunding campaign. Now those too have been swallowed into the abyss. Yet, the gumshoes at IGN dove head-first into the matter and pried some straight answers out of Precursor Games.

Shadows of The Eternal will be launching on the PC and WiiU initially. Starting May 6th, Precursor Games is starting a crowdfunding campaign to make the title. They're asking for $1.5 million, but there will also be the requisite stretch goals, which will include "future episodes, additional characters, additional platforms and in-game perks", according to the developer. Right now, they're looking at replicating the multiple characters and eras from the original game though 12 episodes. Of course, the awesome sanity system will return.

Not much is known about this new studio yet, except that it's Canadian, and ex-Silicon Knights boss Denis Dyack is on board as "chief creative officer". While being billed "from the creators of Eternal Darkness, it's not clear yet how many Silicon Knights vets are on the team. Expect more details once Shadow of The Eternals can officially get it's PR machine rolling next week.