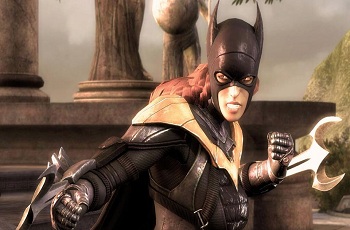 The DC Universe fighting game will be adding Batgirl via DLC in the future.

One of the age old questions that every comic book fan, young and old, eventually asks is "who do you think would win in a fight?" Given the epic scale of fictional realms like the DC Universe, the possible pairings are expansive. Injustice: Gods Among Us was built with this question in mind, and while some gamers would likely be happy to run endless scenarios of Batman versus Superman (just accept that Batman loses), the spectacular depth of the DC cast means the game and its developers, NetherRealm Studios, have a gold mine of heroes and villains that many players would love to run through the ringer. NetherRealm has begun working to add new characters into the mix, promising as many as four new DLC fighters in the near future.

One of these characters was recently revealed to be Lobo, an intergalactic bounty hunter prone to frequent run-ins with the Man of Steel. Now, it has announced that the second DLC character will be Batgirl. "Looks like the bat's out of the bag," said an announcement on the official Injustice Twitter feed. "Batgirl is a playable DLC character in Injustice." While footage of Batgirl in action won't be available until next week, the Twitter post was accompanied by an in-game picture of her looking ready to fight and brandishing some bladed wrist weapons that I'm not sure Batman would fully approve of.

The announcement itself comes with little surprise. A few days ago Xbox Live Marketplace prematurely added the heroine to Injustice's DLC list, tipping gamers off to NetherRealm's plans to add Batgirl to the game. We can only hope she'll have the smarts to stay away from the Joker. Given their past history it might be best to keep a room or two between them.