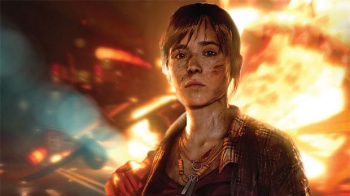 David Cage is nothing if not dedicated to his work. As the founder of Quantic Dream and creator of games like Indigo Prophecy and Heavy Rain, he's something of a pioneer in the field of interactive story-based games. His games' unique nature draws plenty of critique - both good and bad - but Cage says he doesn't let the feedback change his creative vision. "You never design in reaction to critiques," Cage claims, "otherwise you create a product. I'm not creating products. I'm trying to create experiences. I try to be sincere in what I'm doing."

Quantic Dream's current project, Beyond: Two Souls, may look similar to Heavy Rain, but that's simply a consequence of Cage sticking to the genre he practically invented. "The only thing I didn't want to do was a sequel to Heavy Rain," Cage says. "Like, 'Oh let's just do the same thing. Fix a couple of things here and there and just release the same game pretty much.'" The developer has previously argued that sequels are a good way to crush creativity and innovation, so that shouldn't come as much of a surprise. Even if Beyond's dialogue-heavy cinematic gameplay looks similar to Quantic Dream's previous titles, Cage asserts that the experience would be fundamentally different.

Despite the cinematic style of his games, Cage doubts the story of Beyond or Heavy Rain could be recreated in any other medium. "It's not a matter of money," he remarked. Even if the story was broken into a mini-series to avoid cutting content, he says he would write something different for a different medium.

"It's challenging to adapt," says Cage. "When [ a story is told in ] a game, people see how close it is to films. But, actually it's very different from films by essence in nature ... You need to rewrite it pretty much from scratch, which, in essence, means it's truly a game. It's written like an interactive experience and not like a film."

Cage and Quantic Dream have received more than their fair share of criticisms for leaning on story more than gameplay, but their games would definitely suffer if you removed the interactive aspect. The impact that players' choices have on the plot probably makes Heavy Rain harder to adapt to a movie format than most games, where player agency is limited to action scenes and cleanly divorced from the storyline. We'll see whether Cage was right (or more likely we'll keep arguing about it) when Beyond: Two Souls launches on October 8 for the PlayStation 3.