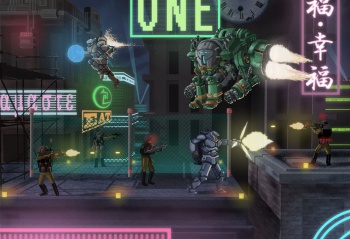 Reboots are in. The promise of the nostalgia dollar has most big developers digging through their couch cushions for discarded IPs. One exception is former 16-bit titan, Sega. The house that Sonic built has left its back catalog relatively unmolested, save for the occasional straight-port re-release and, oh god, that Golden Axe reboot. Now, it turns out that Backbone Entertainment, an outfit known mainly for its HD ports of Capcom's fighting games, pitched a reboot of 16-bit, brawler classic Streets of Rage (or Bare Knuckle if you prefer). Despite the fact a new Streets of Rage game is almost guaranteed bank at this point, 2008's Castle Crashers having sparked a kind of brawler renaissance, Sega rejected the idea.

Artist, Arvin Bautista, has released a handful of concept art pics included in the pitch, as well as a mock-up of what appears to be an updated version of E-Swat. The art itself is charmingly goofy, penned with the same hand-drawn-and-coloured style found in Sonic the Comic back in the day.

Personally, while I'm not sure Backbone are the right team for the job (two words; "Way" and "Forward"), I'd love to see a modern take on Streets of Rage, albeit one more in the vein of Bionic Commando Rearmed or Double Dragon Neon than, say, Golden Axe.