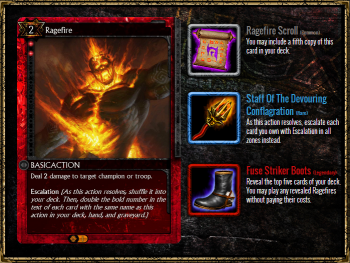 Cryptozoic is trying to find the chocolate and peanut butter mixture for online trading card games.

There's seemingly been a sudden uptick in online trading card games lately. A few weeks back during PAX East , Blizzard announced Heartstone: Heroes of Warcraft and Mojang's Scrolls has been in the works for some time, with a beta imminent. Cryptozoic, the folks behind the World of Warcraft TCG have also thrown their hats into the ring today by launching a Kickstarter to push their TCG MMO hybrid HEX: Shards of Fate to completion. I got a chance to talk to Cory Jones, the President and Head of Creative at Cryptozoic about some of the details.

Akin to the classic Reese's candy, HEX aims to combine two separate and successful genres in trading card games and massively multiplayer online games. Cryptozoic wanted to craft a game that could crossover the two heavily community and social based experiences. In many ways going to your friend's house or your local game shop to play cards is similar to logging in to your favorite MMO and interacting with your friends and guildmates there. For anyone that's been involved in these kind of hobbies, it can often become an issue for players to continue to make it out to their store's events or collect groups of friends together to play as their life styles change, but the hope is that HEX could help alleviate those problems because the online nature will keep you playing and connected with friends.

A single player and PVE experience will also be a part of the game for those who would rather not jump straight into tournaments or would like to work together to conquer some of the raid encounters. The first thing you need to do is create a character or in this case a champion. Drawing from the MMO side, your champion has race, class, talents trees and all the other normal trimming you might expect in a fantasy MMO, and your abilities will have different passive and active effects during the card game portion itself. From the TCG side though, during PVE play you might be required to play with special decks or a character related to the quest might appear in your deck.

What's really neat is how Cryptozoic is taking advantage of the medium for HEX beyond just spells effects and graphics. In a traditional paper trading card game, a card will usually have a static graphic on the back and a front featuring various rules text, information and art for that card. Because HEX is purely online and digital, their cards are not quite so limited. For instance, cards can be socketed with equipment and gems to enhance their effects or a card might transform multiple times during the course of a match. Every card also features a doubleback, which retains and tracks a bunch of statistics of your use of that card. Accomplishing various achievements with that card will be how you unlock alternative art and foil forms, and any trophies you won with the card in your deck will be permanently tagged to the card itself, making it more valuable should you choose to part with it. Likewise, this opens up the game design space for interactions that might normally be problematic in a paper game, like playing a card that places a booby trap card into someone's deck.

The game itself will be pretty easy to pick up for anyone that's played other trading card games. Players will draw a hand of seven cards and rotate turns playing various troop, action, constant or artifact cards with their resources. When you play a resource you'll also gain a charge point, which are what fuel your champion's special abilities. These special abilities are based on your classes and talents, and they can do anything from give all your troops flight or create a new elemental troop on the field. So building a killer deck extends beyond just the cards themselves.

HEX will be free-to-play, with a free starter deck and all the PVE content and cards are available to unlock. If you want to branch out or build a collection more quickly, a prebuilt starter deck will cost $10 and a pack of cards will be $2. A big draw however will be PVP side with all the various tournaments and queues available from booster drafts, where packs get passed around as players choose a single card to try and craft the best deck possible, to constructed tournaments where take your latest brew against other players.

Personally, I've been a big fan of games like Magic: The Gathering for quite some time. I have even been playing recently on the MtG: Online client, but I have to say that HEX has me excited. I like the direction that Cryptozoic is going with really taking advantage of the digital nature of their game. It might not fully replace the experience of sitting around a table with friends, but it could find a place along side that or fill in the times when getting out to my local gaming shop proves problematic, like when I want to draft at 2:00 am.