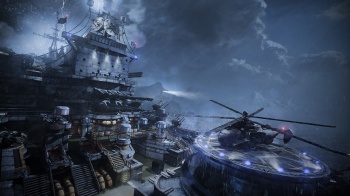 In what may be the most apropos promotional tie-in in history, for the second time in its existence, Gears of War: Judgment will be receiving additional content thanks to the fine boys at Maxim magazine.

Dreadnought is set on the on CNV Pomeroy, a naval vessel where the COG transported captured Locust Berserkers in the months following Emergence Day. However, things quickly went awry.

There's a bit more to it than that but the key takeaway here is that the map takes place on a ship that has run aground and is a prime target for Locust attack.

Gears of War fans will recall this as the second time Maxim has shelled out cash to add new content to Judgment. In March, a DLC pack was released that included two new multiplayer maps as well as the Execution gameplay mode. As with that prior release, Maxim's sponsorship deal with developer Epic Games ensures that all of this downloadable content is completely free of charge. You'll be able to download Dreadnought for the very attractive price of "free" come May 15.

I realize some of you are turning your noses up at the idea of Maxim polluting our precious videogames with its overtly masculine, dude-centric existence, but in the case of the Gears of War series, it's baffling that Epic hadn't teamed with Maxim earlier. Here you have a gaming franchise that could double as a Freudian wet dream and a magazine that is effectively the O'Doul's of pornography. The two go together like chocolate and penis-analogue chainsaw rifles.

Bottom line though, Maxim is paying for all of us to enjoy new content in a popular videogame. Say what you will about the publication, but don't look a gift horse in the mouth.