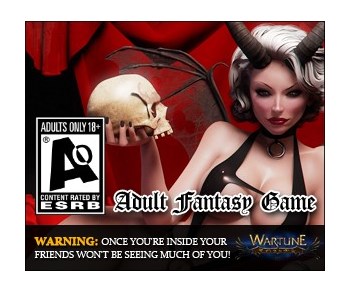 The ESRB says it's against the rules to "glamorize" a game's rating in ads, and besides, Wartune isn't rated AO anyway.

If you've seen ads for the online game Wartune kicking around, there's a pretty good chance you've noticed the AO (Adults Only 18+) ESRB labels prominently displayed on them as well. It's unusual - AO is the white tiger of videogame ratings, and most game makers will jump through hoops to avoid it - but perhaps even stranger is that the ESRB has told the game's publisher to get rid of them.

There are actually two very practical reasons for this. First, ESRB rules state that advertising for a game may not "glamorize or exploit" its rating; second, and more importantly, Wartune isn't actually rated AO, or anything else, by the ESRB.

"We have advised the game's publisher that they must discontinue their unauthorized use of our AO rating icon in its marketing," an ESRB rep told GamesIndustry. "While it's fairly rare for a game to self-apply a rating we will always move quickly to address the issue."

In retrospect, it's a little surprising that more online games don't pull this kind of stunt. Nothing sells like sex, after all, and while an AO sticker is the kiss of death for a box that needs to sit on a store shelf, for web-based online titles that don't rely on the approval of a central distributor it's a bright, flashing beacon that's almost purpose-built to attract a particular demographic.

The ESRB also pointed out that any developer serious about using its ratings for online-only games can take advantage of its free "Digital Rating Service."