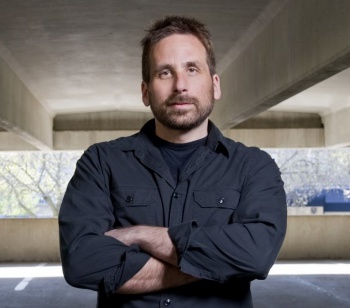 Ambulatory BioShock generator Ken Levine has started writing his next game, and his list of inspirations is simultaneously erudite and vaguely confusing.

Statistically, it's safe to say that those of you reading this text have played BioShock. As such you know that Ken Levine, the creator of the franchise, draws inspiration from a number of disparate sources. Art deco architecture, Objectivist theory, Tears for Fears; All of these otherwise unrelated elements have found their way into the BioShock franchise at one time or another, so while we don't know any concrete details on this new game Levine is writing, we do find it interesting to hear of the man's current fixations.

Early this morning Levine took to Twitter to offer the following, "Game writing this afternoon. This is something else."

Real informative, huh? Shortly after, a fan asked Levine to list his inspirations, and he responded with a handful of interests that read like a list punched into an online dating profile by a twentysomething law school graduate. To wit:

Does this tell us anything about the game Levine is working on? Not really. There are scant links to be found there beyond "Levine's got a fascination with the past" - something we already knew thanks to the BioShock games - and possibly the importance of music. Otherwise Levine's list is all over the place. Stanley Kubrick and Stephen Sondheim may as well be polar opposites in the entertainment world, and we're going to guess that Levine's interest in Mad Men has less to do with his latest project and more to do with the fact that everyone is into Mad Men at the moment.

The only truly intriguing part of Levine's tweet is that he opted to simply write "games," at the end. There's no specificity, no developers called out by name. Assuming Levine isn't inspired by the mere concept of games, we have to think anything more concrete would have let the cat out of the bag on where Levine's plans are headed.

Either that or the man ran out of space. That 140-character limit is the worst.