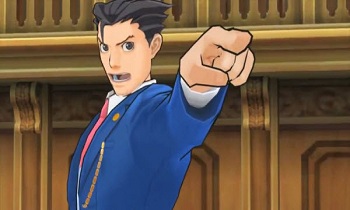 The latest entry in the courtroom saga is getting an English translation and a new name: Phoenix Wright: Ace Attorney-Duel Destinies.

It's been some time since the scales of justice have tilted in the favor of Phoenix Wright fans. With 2010's Ace Attorney Investigations being something of a sales disappointment in North America, Capcom has since been somewhat reluctant to bring new Ace Attorney games out of Japan. A Professor Layton/Pheonix Wright crossover game announced in 2010 never received an English translation. The announcement of Ace Attorney 5 earlier this year, had many fearing a similarly limited release was in store.

Happily, that won't be the case. Capcom has revealed that Ace Attorney 5, retitled as Phoenix Wright: Ace Attorney-Dual Destines, will be coming to North America and Europe this fall. The new game will drop players back in the shoes of Phoenix Wright, who had previously taken a supporting role in 2008's Apollo Justice: Ace Attorney. Taking place eight years after the events of that game, Dual Destinies sets the titular attorney to the task of uncovering the truth behind a destroyed courtroom.

Like previous Ace Attorney games, Dual Destinies' gameplay will center around investigation and courtroom sequences where the player must interview witnesses, ferret out their lies, and use the truth against them. Similar to earlier entries, Dual Destinies will also mix in some wackier elements to diversify the experience. Whereas other installments have included spirit mediums and psyche-lockes, Dual Destinies will give players access to the psychoanalysis ability, which can be used to determine a witness's emotional status and help determine when they're lying.

While the game's English localization is excellent news, it does come with some caveats. Whereas Japan will be privy to a full retail release, American and European versions will be digital only. According to Capcom, a physical release outside of Japan would have cost too much. "Historically it's been tough to attract long term retail support for Ace Attorney titles," said a Capcom representative in a statement. "With the release of Phoenix Wright: Ace Attorney - Dual Destinies we wanted as many people as possible to be able to enjoy the game for as long as possible. With that in mind we have opted for a digital only release via the Nintendo 3DS eShop."

It's a move that's likely to disappoint fans hoping to add a physical copy to their collections. That said, when you consider that we might not have gotten an official English version otherwise, it's an easier pill to swallow. No specific release date has been announced for the North American and European releases. The Japanese version, meanwhile, will be hitting store shelves on July 25th.