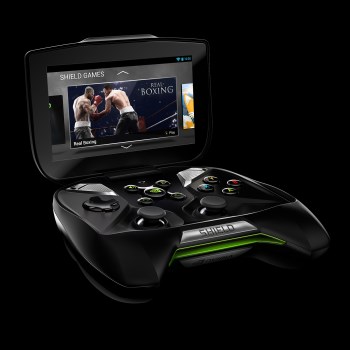 Nvidia's heavy-hitting portable gaming platform is now officially known as Shield and will launch this summer for $349.

Nvidia's portable gaming console was originally revealed to the world in January as Project Shield, and much of what makes it so impressive is already known: Tegra 4 CPU, 16 GB RAM, a full console control setup, five-inch multi-touch 720p display, WiFi, GPS, mini-HDMI output and more, all running under Jelly Bean, the latest release of the Android operating system. Shield will also support the ongoing beta of game streaming through PCs equipped with certain GeForce GTX GPUs, offering access to "a select number of supported games from Steam [and] access to Steam Big Picture" on the device.

It's hot stuff, but the $349 price tag is awfully steep, especially since the whole concept of Android games tends to conjure up images of free throwaways you can play on your phone. Streaming PC games is an interesting idea but limited to those with the not-inconsiderable hardware to run it, and also to the confines of your home; you're not going to play TF2 on this thing while you're sitting in the dentist's waiting room.

It's obviously aimed at the core gamer demographic but between the limitations of PC game streaming and the perception of Android as a free-to-play field of casual mediocrity, I'm not sure it's going to hit that mark. But who else is going to pay 350 bucks for it?

If the answer to that question is "you," then May 20 is the day you'll want to mark on your calendar, as that's when preordering begins; or you can bop over to the Shield website and sign up for notifications, which will hook you up with a preorder link immediately. Nvidia's Shield will begin shipping in June.