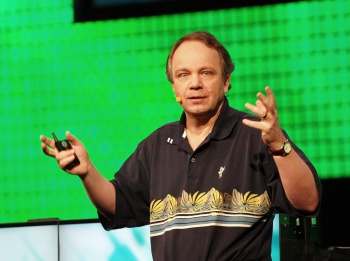 Kickstarter is a huge deal at the moment, but legendary game designer Sid Meier doesn't have much faith that it could benefit his work.

Meier, whose name you all should recognize, is the key figure behind a number of undeniably classic games. Civilization, Alpha Centauri, Sid Meier's Pirates! - the list goes on an on. As a result, when Mr. Meier has something to say about the state of gaming, it's probably for the best that we all pay close attention to the man's words. Particularly when they're aimed at the gaming industry's current obsession du jour: Kickstarter.

Speaking with GamesIndustry, Meier offers two key reasons for his Kickstarter aversion: First, he prefers to remain out of the business side of game development, instead opting to focus on creative work.

"[Publisher 2K Games does] all the stuff I don't want to do; they allow me to make games and really focus on that part of what it takes to get a game out there. I get to design games, I get to program games, I get to work with the artists and the sound guys and do the fun stuff. They worry about testing it and publishing it and promoting it and selling it - whatever it takes to do that I would be really bad at, they do," Meier says.

"So more power to Chris Roberts and the Kickstarter, but having a great publisher is a real asset and allows me to focus on the things that I can do and not worry about all the other stuff that needs to be worried about."

Second, he believes that all of the promotional material needed to attract proper Kickstarter support locks developers into ideas at a very early stage of development. Meier prefers the ability to change things as a game's creation rolls along.

"You've got to convince people to support it and create trailers or whatever it takes to get the support," Meier states. "I think you kind of lock yourself into a lot of ideas early. I really enjoy the luxury of changing my design and evolving over time. I'd be a little concerned with Kickstarter if I committed to X, Y and Z and I found out down the road that Z didn't work very well, I kind of promised to do this."

That said, Meier acknowledges the benefits Kickstarter offers for certain development teams. "I think it's great for people who want that indie environment, but there are advantages and disadvantages to each situation," he adds.

As I mentioned above, Meier is a guy who certainly knows the gaming biz, so it's nice to see him weigh in on this issue, particularly as he's one of the few voices who remains moderate on the topic. Instead of blindly praising Kickstarter, he lists solid reasons why it wouldn't work for him. Propers to Mr. Meier for that, and here's hoping he never has to turn to the public to fund his next big game idea.