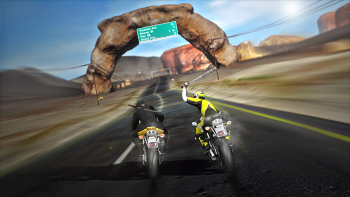 Road Redemption is coming to (at least) the PC and Wii U, allowing a new generation of players to experience the joys of high-speed motorcycle homicide.

Road Rash fans rejoice! Actually, scratch that. Everyone rejoice! Road Redemption, the Kickstarter-funded spiritual sequel to classic motorcycle combat franchise Road Rash has met its $160,000 goal and will be released on the PC in August of this year, with a Wii U port arriving "a few months after."

Sadly, the Kickstarter project didn't quite reach the stretch goal necessary to fund an Xbox Live Arcade port of the game. That would have required $178,000, while the current funding total stands at a tantalizingly close $173,803. Despite this TrueAchievements is reporting that the XBLA port is now in development and looks like "it'll be a September release on XBLA and will more than likely cost 1200 MSP." Developer DarkSeas Games has yet to officially confirm this report, so while pleasant news, we can't entirely say for sure that it's legit. Still, fingers crossed.

As for what you can expect from the game, here's a quick list of the various gameplay modes DarkSeas has planned for the title:

Combat Race: This is your typical mission. Compete with rival bikers for rewards, such as a broken down armored car, full of hard currency. Either get there first or be the last alive.

Police Escape: An army of police cars, bikes, and choppers are on your tail. Lead your fellow club members to safety. No reason not to cause some damage along the way. A well-timed lead pipe to the face will take a cop off his bike. Similarly, a well-placed round from a grenade launcher disables a police vehicle pretty effectively.

Assassin: You've managed to whittle a rival motorcycle club down to a few members. Now it's your job to chase down their leader through a crowded city. Of course, his last remaining lieutenants are going to make that as hard as possible for you.

Convoy Assault: You got word that a convoy of 18-wheelers is passing through your territory. If you can defeat the vehicle's heavily-armed escort, the bounty is yours. A shotgun blast to an 18 wheeler's tire tends to slow it down.

Escape from Enemy Territory: A planned exchange on the roof of a skyscraper has gone awry, and now you're alone on rival turf. Race from rooftop to rooftop as you try to escape rival motorcycle club members, who are vying for your head.

Ambush: A rival club thought they could have a relaxing ride home after a big score. Little did they know that you've been scouting them. Take out as many as you can before they reach their home base.

Fan Suggested Missions: We're eager to hear what you want to do in Road Redemption, so please let us know.

These mission types will appear as part of the game's singleplayer and multiplayer modes, and as you'd expect from a game linked to Road Rash players will also be offered a number of brutal weapons to use against fellow racers while speeding down the asphalt. You can find full details on the game's Kickstarter page.