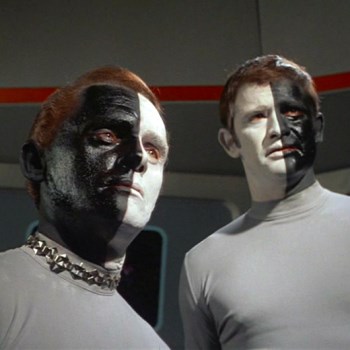 If you want to roll with the Whovians, you can't be afraid to throw down when some Star Wars jackwagon gets out of line.

It was a fine spring day this past weekend at an event hosted by the Norwich Star Wars Club and all was well - until members of the Norwich Sci-Fi Club decided to crash the party. Sci-Fi Club Treasurer Jim Poole claimed Star Wars Club organizer Richard Walker tried to bounce him as he sought an autograph from Graham Cole, who according to Wikipedia appeared, often uncredited, in numerous 1980s episodes of Doctor Who. Words were exchanged; they then took it outside, where more words were exchanged.

Reports of a man being assaulted led to police intervention in the standoff, which involved more than a dozen fans from both sides, some in "fancy dress," according to the Norwich Evening News. The situation was tense - these were serious sci-fi hardballers on the scene - but fortunately police were able to contain the matter before anyone got shanked with a sonic screwdriver, or came into any other kind of unwanted physical contact with a stranger.

"After lengthy investigation, talking to witnesses and reviewing good CCTV footage, it was confirmed that there was no assault," a police spokesman said. "The two rival groups were spoken to and advised to keep out of each other's way."

Representatives from both groups said a "long-running rivalry" existed between them, and the Star Wars club claimed that Doctor Who fans had tried to undermine the convention by posting nasty comments about it on Facebook. Nonetheless, the two sides expressed hope that they could work out their differences for the greater good of the galaxy.