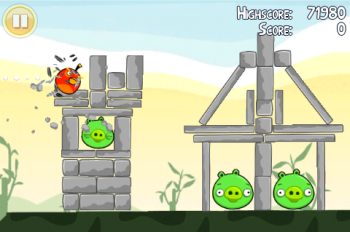 The Angry Birds film adaptation moves one step closer to reality with the announcement of an official release date.

Are there any two words in the English language more beautiful than "Angry Birds?" Yes, of course there are. Many of them. Despite this, the Angry Birds franchise has attracted the kind of global following usually reserved for Liverpudlian musicians and long-haired hippie messiah types. Thus, and despite everyone's better judgement, a film based on the Angry Birds games was inevitable.

Actually, it's more than inevitable. You'll be able to plunk down money for tickets to this flick on July 1, 2016. According to the Hollywood Reporter, Sony Pictures has struck up a deal with Angry Birds publisher Rovio to bring the movie to the silver screen, and July 1 is the date the two firms have decided upon.

"Sony impressed us with their great attitude, determination, and professionalism," says Rovio CEO Mikael Hed. "They convinced us that we have found the right partners and team to help us market and distribute our first motion picture."

With this film's debut being so far off, it should come as little surprise that the cast and crew of the 3D animated movie have yet to be nailed down - or, if they have, that Sony and Rovio are being very tight-lipped about the whole thing. The only really useful information we have is that Despicable Me producer John Cohen has signed on to produce the Angry Birds movie alongside Iron Man executive producer David Maisel. Expect more details to slowly emerge over the next ... well, three years or so.

With that much time to kill, there's only one thing we, as vaguely intrigued observers, can do: Speculate wildly on what this flick might be like. Personally, I'm hoping it's a Heart of Darkness spoof where a loyal red bird is forced to fling himself deep into the heart of the Congo, and directly into the path of a crazed, despotic pig. Bonus points if any of this causes Martin Sheen to suffer a heart attack.