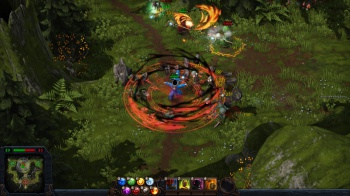 Magicka's MOBA sequel is a game of spellcasting and friendly fire in a brand new set of robes.

Paradox Interactive's Magicka was an undeniably silly game, but behind its humor and chaotic teamkills lay a tightly crafted spellcasting system. Skilled players weren't the ones with the highest XP or the best items, but those who could think on the fly to cast the right spell at the right time. That's the kind of experience that could make its follow-up, Magicka: Wizard Wars, a very unique PvP title. Although confirmed details are few, Paradox Interactive has finally revealed some screenshots for the upcoming MOBA, showing that we can expect near-identical gameplay along with some slightly polished visuals.

Magicka: Wizard Wars will bring the original's co-op gameplay into the MOBA genre, with a strong emphasis on team-focused combat, fast-paced matches, and more custom robes than you can fill a closet with. Based on the screenshots, Wizard Wars will be a larger, more robust version of Magicka's Team Deathmatch, but other gameplay modes may yet be announced. Outside of enhanced visuals and the addition of a quick-cast bar, Wizard Wars looks like business as usual for mages-in-training. Players still cast healing and protective wards on themselves while lashing out with deadly offensive spells, all the while hoping that nobody gets the two mixed up.

Five screenshots aren't enough to give a full picture of the game, but Paradox has promised a full PvP experience that encompasses the original's self-referential sense of humor. A release date hasn't been confirmed yet, but hopefully fans will be summoning thunderstorms and meteor strikes on entire maps in the very near future.