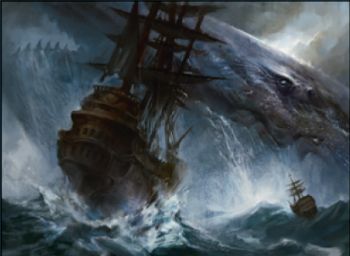 Sure, this card might be the backbone of an amazing tribal deck, but it's certainly no Sliver.

This summer's Magic: the Gathering Core Set hasn't seen too many reveals, but the reintroduction of Slivers to the game has fans simultaneously clamoring for more, and demanding heads on stakes for the not-so-subtle changes to the way they behave from the original incarnation of the creature type. If you're not a Sliver aficionado, the difference is that the new Slivers only affect creatures you control, making their interactions in the game generally easier to manage, but not really keeping with the original spirit of the creature type. Today's preview card probably won't cause that much of a stir, since it's not actually a Sliver, but it's a neat little party trick for limited.

Its name is Colossal Whale, and it has a matching casting cost. At seven mana, this guy is already off the table for 90% of constructed decks, but it's not too hard to get to seven mana in limited formats, so we're keeping hope alive.

It's a 5/5 creature, which is a little small for the casting cost, but still beefy enough to be considered a "bomb" in the right circumstance.

The gold M14 symbol means it's a Rare, and it has the "Whale" creature type, making it only the fourth Whale creature ever printed.

Now we get to the good stuff. As a 5/5, there aren't going to be too many creatures that can block it favorably. When you're utilizing this ability, it makes it even harder to be able to kill the Colossal Whale with blocks, since your best blocker is going to get removed every time it attacks. This guy is no Angel of Serenity, but he's got some serious bomb potential in Limited formats like Sealed Deck, especially in the Two-Headed Giant variety.

Putting all the pieces together, we're happy to introduce Colossal Whale! Enjoy!