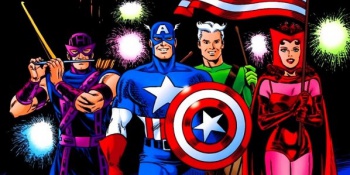 One's a hyper-fast elitist and the other's his gorgeous, nigh-omnipotent sister. Joss Whedon explains how Quicksilver and the Scarlet Witch might fit into The Avengers 2.

In Marvel's comic book continuity, Quicksilver and Scarlet Witch are ... interesting characters. That was an ellipsis of hesitation, as I've no real idea how to describe a duo who has, over the past few decades, depowered the majority of mutant-kind, introduced a new generation of comic book fans to the concept of fraternal incest, and opted to side with their father, the oft-megalomaniacal Magneto, as often as they've played for the side of the angels. Plus Scarlet Witch got knocked up by a robot and had two kids that may or may not actually exist. Then she went crazy and rewrote reality.

Point being: When compared to the cast of heroes assembled for The Avengers, Pietro and Wanda aren't exactly sterling representatives of the battle against evil. According to director Joss Whedon, that kind of conflict is exactly why he's added Quicksilver and the Scarlet Witch to the cast of Avengers 2.

"They're interesting to me because they sort of represent the part of the world that wouldn't necessarily agree with The Avengers," Whedon states in a recent IGN interview. "So they're not there to make things easier. I'm not putting any characters in the movie that will make things easier."

Conflict? Great. We're all about conflict. Especially when one of the characters creating said conflict has the power to do literally anything. If nothing else, that should justify some awesome CG effects.

Fortunately for Whedon's plans, the inclusion of Quicksilver and the Scarlet Witch in Avengers 2 should also appease long-time, hardcore comic book fans. The duo have a long history with The Avengers, and the Scarlet Witch is considered one of the group's core members in the comics. Of course, if this is going to be a trend, we fear which new heroes Whedon will want to introduce in Avengers 3. Wonder Man? Tigra? The Monica Rambeau Captain Marvel?

Have I ever mentioned how much cash I'd spend to see a proper Nextwave film adaptation? Millions, you guys. Millions.