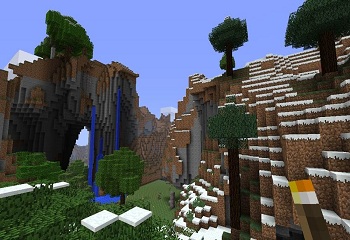 YouTube can be a complex place. Nintendo recently earned the ire of the Let's Play community by invoking its copyright power, claiming ownership of Let's Play videos en masse. The big dispute is whether the "owner" of the video is the company that made the game or the person providing commentary. It seems this question is reaching beyond Nintendo, however: Minecraft creator Markus "Notch" Persson announced that he had met with YouTube to discuss taking similar action with Minecraft videos. He and the rest of Mojang decided against it - to the relief of Minecraft Let's Play hosts everywhere - but he came close to taking the deal.

We had a meeting with YouTube and got told we could get a cut of all Minecraft video ad revenue. It was tempting.— Markus Persson (@notch) May 16, 2013

It's not hard to understand why. Minecraft is an incredibly popular topic for Let's Play videos, and the combined revenue would add up to quite the pretty penny. In the end, Mojang decided that it would be better to not interfere with the community; the videos draw plenty of attention as it is, and those views can be considered free advertising for the game. To take the ad money away from popular YouTube personalities could push them away from Minecraft, like many are already doing with Nintendo games.

Mojang isn't the only one viewing these videos are free advertising. Notch mentioned that Machinima.com, a host of Let's Plays on YouTube, demanded a cut of Mojang's profits in return for the "advertising" provided by the videos. Expressing his thoughts on Reddit, Notch admitted that Machinima's hosted videos do bring in Minecraft sales, but he also pointed out that Machinima was making money from Mojang's work. "It's the perfect example of a win-win situation," he wrote, "and them asking for money from us was just offensive ... They have amazing engineers and passionate directors, but their business practices are insane."

For the time being, it seems the Minecraft community is safe to do whatever it wants with the game and upload the results to YouTube, though it remains to be seen if Machinima will take action against Persson's rebuttal. Hopefully this doesn't mean we're going to see a chain of publishers taking ad revenue from creative fans, because that's one surefire way to kill a valuable source of user-made entertainment.