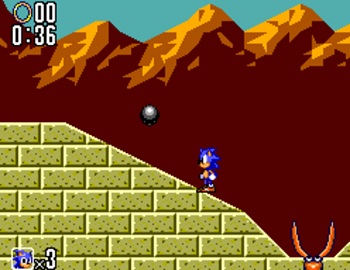 After a long wait Game Gear fans can finally look forward to a new batch of ports heading to 3DS.

When it was first released, the Game Gear looked like coolest thing in the world. Sleek, black and boasting a backlit screen with full color visuals, it made the Game Boy look like an ugly gray brick in comparison. Sure it was much more expensive and treated AA batteries like buffet items, but it still had a lot going for it in the competition for the 90s handheld market. That being said, its higher price tag and the Game Boy's general status as unstoppable portable juggernaut eventually led to the Game Gear's defeat, since which it has faded into relative obscurity.

Ironically, salvation for the Game Gear's software library would come from of a Nintendo handheld. In 2011, Sega revealed that it would be adding digital versions of Game Gear titles to the Virtual Console section of the 3DS eShop. After the fulfillment of a few promised releases however, efforts to port Game Gear titles slowed to a halt. That being said, Nintendo president Satoru Iwata announced earlier today, during a Nintendo Direct live feed, that thirteen new Game Gear titles will soon be making their way to the 3DS.

The list of forthcoming games will include: Columns, Crystal Warriors, Defenders of Oasis, Dr. Robotnik's Mean Bean Machine, G-Loc Air Battle, Shining Force II: The Sword of Hajya, Sonic the Hedgehog, Sonic the Hedgehog 2, Sonic Blast, Sonic Labrynth, and Vampire: Master of Darkness. While these still only represent a small fraction of the hundreds of titles released on the Game Gear during its lifespan, this batch includes several of the better entries in its library and should be enough to tide fans over until Nintendo and Sega get around to releasing more, probably several years from now.