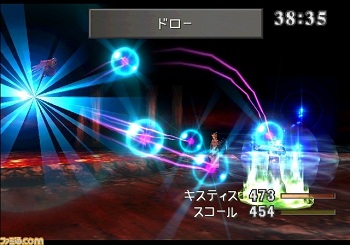 Square Enix is working on a new version of Final Fantasy VIII that smooths out the graphical wrinkles of the PlayStation era.

There are eras of gaming that have aged arguably better than others. Looking back on the 16-bit years, for instance, there are many gamers who would probably still consider it a beautiful time for gaming. The 32-bit years, on the other hand, often feel like the awkward teenage years of videogame visuals. 3D graphics were still new and there are more than a few games that look less than stellar now that the passage of time has shown us just how good things can get. In short, what was shiny on the PlayStation may not be so shiny today.

Hoping to spruce up one of its PlayStation-era titles, Square Enix has revealed that it's working on a high-resolution version of Final Fantasy VIII for PCs. Currently lacking a release date and still exclusive to Japan, the new version of VIII will polish away the rougher edges of the game's visuals. It will still maintain many elements of a late-90s PlayStation title, but screenshots released by Square Enix definitely point to an experience that looks smoother than its original release.

One thing we'd love to see, if this version of VIII is a success, is a similar high resolution version of Final Fantasy IX. Aside from being sorely under-appreciated, IX is the only member of the mainline PlayStation Final Fantasy's to never see a release on PCs. Considering its visuals, though rooted in a different art style, suffer from largely the same problems as Final Fantasy VIII, it too could benefit from a bit of smoothing out. Final Fantasy VII, of course, saw a PC re-release in 2012.