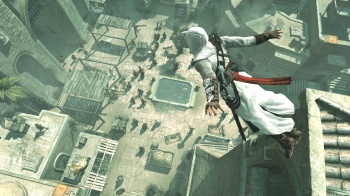 Despite Hollywood's ability to create sprawling epics that take audiences to different ages, worlds and realities, a good videogame movie seems like a puzzle the film industry is never going to crack. There have been some films to come close. Mortal Kombat is fun, if not necessarily good, and some would point to Angelina Jolie's Tomb Raider as being an entertaining romp. That said, there has never really been a movie based on a videogame that franchise fans, audiences, and critics alike have looked at and loved.

We'll give Hollywood some credit though, they're persistent. The long in the works adaptation of Assassin's Creed has recently been gifted with a release date. The film, whose cast includes X-Men: First Class and Prometheus star Michael Fassbender, is now set for release on May 22nd, 2015. The film, which is being made by Ubisoft Motion Pictures, will be co-produced and distributed by New Regency and 20th Century Fox. Sony Pictures had previously been in talks with Ubisoft to acquire film rights to the franchise, but the deal fell apart due to strict requirements placed on the deal by Ubisoft.

Given the complex lore behind the Assassin's Creed franchise, there is a lot of material already available to help make film with several sequels. That said, there are virtually no details released at the moment and the film's creators haven't even let slip which character Michael Fassbender will be playing. The film's new release date could also raise some concerns. While it seems natural for the film to take part in the summer blockbuster season, its success could wind up being stunted if other prominent projects slated for that year steal its thunder.