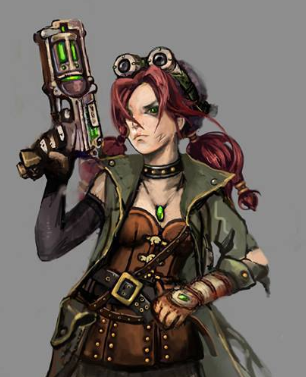 American McGee has been angling for an Alice sequel for some time, but is dependent entirely on the goodwill of rights holder EA. Since it's always good to have a backup plan, McGee is toying with the idea of putting zombies in a steampunk version of the Wizard of Oz, in the event Alice doesn't work out for him. "There's so much fun stuff to explore," says McGee, "so many interesting characters and locations to discover." So many brains to eat as well, though that may have more attraction for Scarecrow than McGee personally. It's only in the very early stages, which means it exists as concept art - like the Dorothy you see here - and not much else.

It could go anywhere. A tentative narrative has Scarecrow, dissatisfied with the brains the Wizard gives him, going on a rampage across Oz to turn everything he meets into a zombie. Oz itself becomes a post-apocalyptic wasteland, in the game McGee's calling - at least for now - OZombie. But there's many a slip twixt the brainpan and the lip, and while McGee's thinking about Kickstarter tiers, there's no way to know whether or not this zombie apocalypse will ever see the dying light of a steampunk sun.