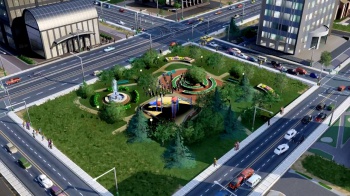 The new patch also re-enables leaderboards, a feature that has been disabled since shortly after the game's disastrous launch.

Oh SimCity. God bless you for trying. Despite most people have written off the game as being fundamentally broken, you have to admire Maxis' dedication to keep trying to fix it. Patch 4.0 (back in my day, whole number patches used to denote a "major" content release...) is desperately trying to regain the attention and trust of those SimCity fans that picked up the game on release, adding a new "Launch Park" which is exclusive to "early adopters." The patch also adds a new region, and re-enables several features (including leaderboards) which have been disabled since shortly after launch, when Maxis turned them off in an effort to ease server strain.

It isn't stipulated just how early of an adopter you had to have been to receive the "Launch Park," but we can probably assume if you were one of the players who could take advantage of EA's free game apology, you'll be eligible. The new region, Edgewater Bay, features seven cities clustered around a single Great Work site. Shortly after the game launched, players were quick to discover that large regions were actually made up of several 4-city clusters that had little to no interaction with other clusters in the region. Edgewater Bay's seven city cluster, if it actually offers the full range of interactivity between cities, should be a step in the right direction.

Leaderboards, dynamic global market prices and region filters, which have been disabled for several months, will finally be re-enabled in the patch. Cheetah mode, which was disabled at the same time as these features, and arguably had the greatest affect on actual gameplay, was re-enabled in a previous patch.

Other fixes include cities actually getting enough rain to replenish their water tables, and some tweaks to the borderline demented behavior of your city's brave firefighters.

Patch 3.0, released earlier this month, aimed to fix traffic and other bugs.

Despite publishing several patches and a couple pieces of DLC for the game, Maxis and EA have still refused to comment on the fact that hackers have discovered the game's "always-online" requirement (as well as the small city sizes) are a complete fabrication, and the game is actually completely playable offline. Until they address this, they can give me all the free early-adopter DLC in the world and I will still never buy another EA game again.