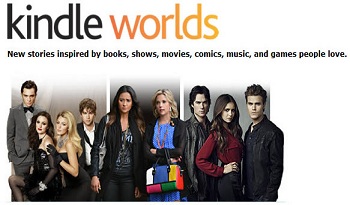 Amazon's new Kindle Worlds service will give fan fiction writers a place to publish their work and earn royalties.

Sometimes stories just don't turn out the way you want them to. When that happens there a few things you can do. You can move on and accept the ending, or, as some do, you can bake cupcakes. Another alternative many take is fan fiction. Whether you're reading or writing it, fan fiction can be an outlet to explore new takes on familiar content, explore different facets of story, or introduce new scenarios for beloved characters to run through. Granted, fan fiction can be a bit weird at times (go ahead and Google "Batman dates the Joker"), but it's nonetheless a niche with a real audience and wide appeal.

An appeal that Amazon would like to monetize. Along those lines, the online retailer has announced Kindle Worlds, a publishing service writers can use to create and sell fan fiction. To do this, Amazon has signed licenses to publish material based on television shows including Gossip Girl, Pretty Little Liars, and The Vampire Diaries, with more properties on the way.

To test out Kindle Worlds Amazon gave several fan fiction authors early access to the service. The response was overwhelmingly positive. "There's probably not an author/fangirl alive who hasn't fantasized about being able to write about her favorite show," said Trish Milburn, who writes fan fiction for The Vampire Diaries. "The fact that you can earn royalties doing so makes it even better." The royalties range from 20-35% percent of revenues earned from story sales. Stories, meanwhile, will be priced between $0.99 and $3.99 depending on length. Amazon can opt to reject stories based on content guidelines provided to writers.

While it could be easy to roll your eyes and pass it off as Amazon trying to turn the enthusiasm of fans into money, there is some arguable potential behind this. While there are indeed some lousy writers involved in the world's fan fiction communities, there are also arguably authors that have put out solid takes on established franchises. There are abundant ways this could suck, but there are also ways this could open new doors across a variety of mediums. Imagine, for instance, if this were a service for fan made films or games? There are plenty of fan developers building projects gamers love that actual game companies won't touch. If profit were an option, perhaps the industry might offer more support and fewer "cease and desists."

Everyone Wants a Wii for Their Wedding krysalist 0 Comments