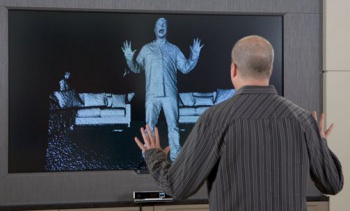 Interested in the next generation Kinect but don't want to have to join the console gaming peasants to experience it? Good news, you can still enjoy it from up on your PC gaming pedestal.

If you cut through the nerdrage surrounding Microsoft's inability to give concrete answers about the Xbox One's "always-online" requirement, and supposed pre-owned games fee, one of the more interesting tidbits announced in its Xbox One reveal event was a brand new Kinect that will come packaged with every console. It actually sounds pretty cool, and making sure that it is included in every box means that more developers should actually program games for it this time around.

But, what if you are interested in the new Kinect, but you are a part of the glorious PC gaming master race and don't want to sully yourself by associating with those filthy console gaming peasants? Good news, the next generation Kinect is coming to Windows PCs next year.

Both the new Kinect sensor for Xbox One and the new Kinect for Windows sensor are being built on a shared set of technologies. The sensor comes with HD color camera and a "noise-isolating multi-microphone array that filters ambient sounds to recognize natural speaking voices even in crowded rooms." If nothing else, it should make for a pretty fancy webcam to Skype your Grandma on.

The new infrared camera feature introduced with Xbox One's Kinect will also be included in the Kinect for Windows, allowing you to constantly wonder whether or not your PC is recording your daily habits to plot your eventual murder.

A development kit will be released ahead of the device's release some time next year. It wasn't specifically stated whether the Kinect for Windows and the Kinect for Xbox One will be cross-compatitble, but since the feature list is pretty much the same we can assume they will be. This should make porting games that feature Kinect to PC a lot easier on developers.

At the BUILD 2013 event in June, Microsoft will share details "about how developers and designers can begin to prepare to adopt these new technologies so that their apps and experiences are ready for general availability next year."