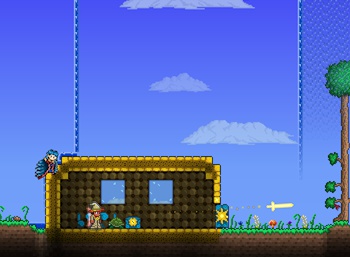 A majority, if not all, content from the quite hefty 1.2 update for Terraria on PC will be coming to its console versions as DLC.

Recently, developer Re-Digit announced a quite hefty amount of new content for the previously-thought-finished sandbox constructor Terraria. The update was an ode to joy for PC fans of the game, who felt snubbed when their console brethren were treated with exclusive content.

However, it looks like console gamers will have the last laugh, as it now seems the 1.2 patch, which was previously thought to be PC-exclusive, will be coming to consoles after all. 505 Games, the developer of the PSN and Xbox Live versions of Terraria, has announced that it plans to bring "as much as we can, if not all, of the PC content to consoles in the near future."

"505 Games is giving Re-Logic as much space as possible to continue this, as we all have seen, creative and innovative streak. Once they have fully developed their vision for the future of Terraria, we will announce our plans for the delivery of this highly anticipated DLC."

505 Games said that the content will be released as "DLC". It stopped short of saying "paid DLC," but given Microsoft's history of refusing to allow free content for games on its service, it seems very likely. We have been promised that the PC version of the update will be completely free.

This move brings up the question of, if this new PC content can be brought over to consoles, shouldn't Re-Logic be able to port the previous console-exclusive content back over to PC? That would be a really good "good-faith" gesture to the PC fanbase that was upset with Re-Logic's decision to allow the console versions to have exclusive content in the first place.

Re-Digit hopes to get the PC version of the patch out by July.